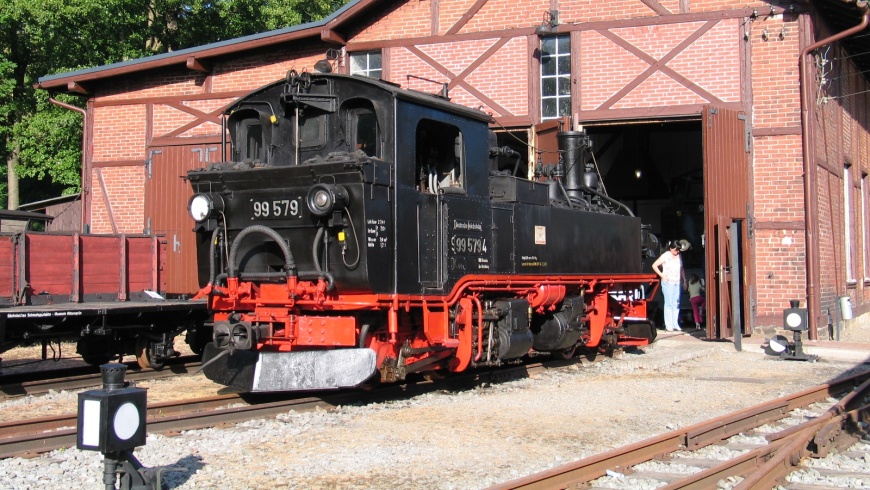 The railway brought into the border village Rittersgün in the end of 19th century not only easier travelling, faster supply of the neighbouring industrial factories, but also tourism. The narrow-gauge railway was leading from Grünstädtel to Oberrittersgrün and its regular service stayed there until 1971. More about Rittersgrün »

The museum exposition of narrow-gauge trains:

In the reception building, you will learn something about the history of Rittersgrün. You can see a model of "Rittersgrün meteorite", which was found in nearby woods in 1883. In addition, the exhibition deals with the technical equipment of railway traffic, which you can partly try out yourself.

If you go to the warehouse in the reception building, you will see the exhibition "Old wagonry in the Ore Mountains", which describes the traffic in the mountains before the era of the railroad.

After going out of the building, you won’t miss the train in whose carriages on the information boards you can read about the history of narrow-gauge trains. Apart from this train, there are other locomotives and train cars (passenger and freight). The Imperial postal car is perhaps the most remarkable piece.

In addition to the real trains, exhibition of the development of model trains and automated functional railway model can be found in the museum.

From the station in Oberrittersgrün, there is also a narrow-gauge tourist train on the 600m long railway up to the Pöhlbach valley where it turns back. The timetable is not necessary; train goes at quarter-hour intervals from Tue to Sun at 10:00-17:00. Adults pay 2 €, children 1 €.