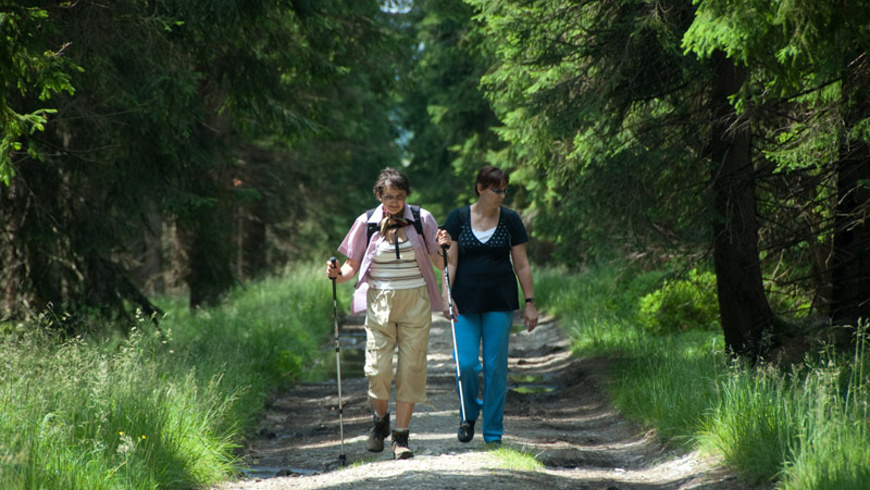 Paths of hundreds of kilometres entwine through the Ore Mountains and they often go along the cycling tracks. This site will show you some destinations reachable by walking in the vicinity of Boží Dar. You can combine these tours as you like. Detail information about tours and more practical tips provides the stuff at the Tourist Office Boží Dar.

Favourite tracks and destinations of hiking tours in Boží Dar:

A nature trail designed especially for children. You can choose from 2 circuits: 5,6 and 12,9 kilometres long depending on your child’s age and abilities. Children get to know the Baby Jesus world and write down all the solutions of the tasks they will find at the stations. Get the Baby Jesus notebook at the Tourist Office in Boží Dar. On the way, there are attractions by the stations where children can have fun or relax. Children will receive small gifts for fulfilling the tasks at the Tourist Office as they come back. For more information about Baby Jesus Path»

Where to: You set out on the trail from the Tourist Office Boží Dar.

The Božídarské rašeliniště National Nature Reserve has been over 40 years under protection. It covers an area of 930 hectares. The peat bog is a biotope which is home to a large number of endangered wild floras and fauna species almost became extinct because of mining. About 3-kilometres long natural trail leads through the peat bog and 12 information boards provide information about the nature reserve. For more information about natural trail Božídarské rašeliniště »

Where to: the first information board is placed on the Boží Dar square.

Blatná ditch is a unique technical monument from the mid-16th century, which supplied water for local mining operations. It is a 13-kilometres long channel to supply water in Horní Blatná from the catchment of the Černá River. The last renovation was completed in 2001 and a 12-kilometres long natural trail was built. For more information about natural trail Blatenský příkop »

Before you head to the end of the natural trail, make a stop at Blatenský vrch and take a look at the beautiful scenery from a stone-made lookout tower.

Where to: Connect onto the trail from a roadway leading to Ryžovna. The trail starts 150 meters behind the last information board of Božídarské rašelinište nature trail.

These two border crossing trails are designed for hikers, cyclists and cross-country skiers. They are connected to the network of the Czech-German border tracks. Lukáš Bauer Tour is 7,5 km long and Jens Weissflog Tour is 24,5 km long.

Where to: Both trails start in Boží Dar and continue to Na Vraky and return on the road from Boží Dar border crossing.

While going from Boží Dar to Klínovec you find a monument from the time of the empress Maria Theresia. About 150 meters from today’s border crossing there is an old border stone on the border of three historical areas (Bohemia, Saxony and a territory belonging to Schwarzenberg family). It is a three-sided stone with a historical coat of arms on it. Next to the old stone, there is a today’s border stone marking the Czech-German border.

Where to: State the trail towards Klínovec, cross the roadway near a turning leading to Neklid Ski resort. Continue to a wooden cabin and then go along a concrete path to the state border. Follow the border apx. 150 metres.

Klínovec , the highest peak of the Ore Mountains, offers its visitors wonderful opportunities for trips. There is a TV broadcasting tower on the top of the mountain and an observation tower extended with a hotel, but they are currently in poor condition. After you mastered some ascents you will be treated to magnificent views over the Czech and German panoramas.

Where to: If hiking or biking, follow the red-marked path from Boží Dar. You can also use a cableway from Jáchymov which should be less demanding for you.

Village of Ryžovna, a typical hamlet of the Ore Mountains, was established to obtain the grains of tin and ore mining. Later on, agriculture and making bobbin lace were very common. As other villages in this region, Ryžovna was levelled except for a few buildings and only a few residents are still living there.

In Ryžovna visit a place devoted to Church of St. Wenceslas, patron saint of the Czech state. The church was levelled with the rest of village and today is reminded only by its miniature, a burial mound and an information board. For more information about Ryžovna »

Where to: Ryžovna is located about 6 km to the west from Boží Dar. Set out on the nature trail Božídarské rašeliniště (Boží Dar Peat Bog), then connect onto the nature trail Blatenský příkop (Blatná Water Ditch) and you certainly won´t miss Ryžovna..

Jáchymov is world famous not only for its radon spa but also for the silver coins mint there, the so called Joachimsthaler, which gave its name to the dollar. Jáchymov is the place where Marie Curie Sklodowski and her husband Pierre discovered the elements radium and polonium. It is about 7 km of a town Boží Dar. You can discover a wide range of other points of interest in and around. For more information about Jáchmov »

The highest spa town in Germany attracts visitors by sport resorts, museums, supermarkets and local shops, a lookout tower, a workshop and many other attractions and activities. For more information about Kurort Oberwiesenthal »