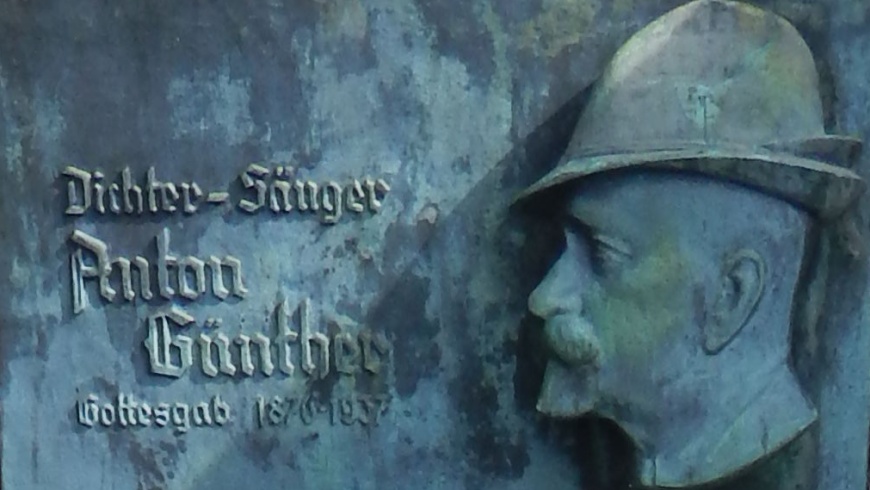 Two important personalities lived and worked in Boží Dar. Nikos Kazantzakis as well as Anton Günther were inspired by the violent natural beauty and life in the Ore Mountains. Their experiences and adventures are conveyed in their works.

The most important Greek writer of the 20th century Nikos Kazantzakis was born on 18 February 1887 far away from the cold Ore Mountains, on the sunny island of Crete. He studied law in Athens and philosophy at Sorbonne University in Paris.

Still on the go

He was a great adventurer. His path led to Sweden, Russia, he lived in Berlin and in Vienna where he started his journey to Africa and Asia. In 1948 he worked as an advisor for UNESCO in Paris. Unstable development in Central Europe blew the big Cretan in the early 1930s to the former Czechoslovakia.

In Boží Dar by accident...

This writer found his creative energy only in contact with the primary elements: earth, water, sun and sea. Hustle and bustle of big cities was exhausting for him and therefore he ran into the "absolute solitude in the middle of the snow". This came to him on the train to Prague when a random passenger, a Czech miner, offered him to get off the train in Jáchymov and continue to the altitude of 1028 m where Boží Dar is located. He found refuge in Myslivny in the house of Mr. Filip Kraus.

Thanks to the muses of the Ore Mountains

Kazantzakis spent two seasons in Boži Dar – from 10 May 1928 to 9 April 1930, and from the end of June 1931 to 31 May 1932. The main sense of his stay in Boží Dar was not only in the low rents and modesty of living, but primarily in the creative activity on his epic poem The Odyssey which he considered his greatest work. He devoted most of his two stays in Boží Dar to working on the second and third version of the epic, which he started to write in 1924 in Crete. The third version, which was completed during his second stay, became the basis of the final version of the poem which includes 333 333 verses. However, the germs and plans of Kazantzakis’s other major works such as Captain Elias, Captain Michalis, originated here. During his second stay in Boži Dar, the writer returned to the idea of a film script. Thus arose the sketches to films Buddha, Don Quijot, Decameron, Eclipse and more.

It can be said that the time spent in Boží Dar was extremely fruitful for Kazantzakis. It is necessary to say that our composer Bohuslav Martinů had a very warm relationship with Kazantzakis and composed an opera according to the draft of the book Christ Recrucified. In 1952, the first symptoms of malignant disease appeared and Nikos Kazantzakis died on 26 October 1957.

The monument to Anton Günther, a folk poet and singer-songwriter, was unveiled in 1936 in honor of his 60th birthday. An important source of inspiration for his work was the beauty of nature, his family and difficult life in the harsh conditions of the Ore Mountains.

Over 100 songs and poems came from his pen. Günther‘s songs appeared in music publishing, on records and song postcards. His most known song, which is known to most Germans, even those to whom his name is not so well known, is called "'s is Feierohmd" (loosely translated "Eve, end of work"). Another jewel of his work is a song dedicated to his grandmother, whom he loved, "Grossmütterle".

The Life Of Anton Günther

Anton Günther was born on 5 June 1876 in Boží Dar , as the second child of Johann Günther and his wife Elizabeth. After graduating from school, he wanted to become a forester, because he loved forest but it was denied to him. His father put him to learning to litographer Schmidt in Buchholz by Annaberg. In later years, he used this experience in issuing his song postcards. In 1908 he married Maria Zettl in Boží Dar. When World War I broke out, Anton Günther had to join the army of Austria-Hungarian Monarchy. He didn’t return home until 1918. He was a frequent and welcome guest in neighboring Saxony, where he was lovingly called "Tholer-Hans-Tonel".

The Death Of Anton Günther

In the early 1930s a change took place, and it was not so easy to cross the border any more. The subsequent political turmoil and bleak thoughts left marks on him. On 29 April 1937, he decided to voluntarily end up his life. However, he lives in his songs and poems to the present day in the hearts of the inhabitants of the Ore Mountains.

You can find the Monument to Anton Günther near the Tourist Office in Boží Dar. Every year, a cultural event "Singing", organized by his German supporters, takes place at the monument. If you want, you can complete a 65 km long circuit along the ridge of the Ore Mountains called the "Path of Anton Günther". It starts and ends in Boží Dar.

An almost forgotten native, he was at the time of the Baroque a renowned geographer, biologist, but above all a mining expert. He held the position of the provincial mine inspector of Bohemia. He significantly contributed to the scientific and technical development of mining. In 1780, he wrote a monograph on the history of ore mining which still belongs to the significant works of the Czech historiography of mining.