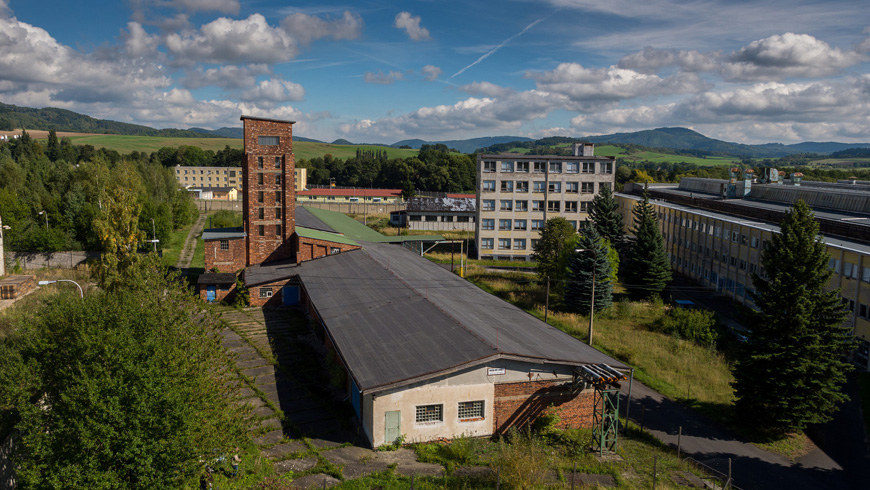 The component part is located in the industrial grounds in Dolní Žďár, ca. 2 km to the north of the town of Ostrov at the foot of the Ore Mountains. The Red Tower of Death (Rudá věž smrti), originally a central crushing and screening plant of the uranium ore, documents the period of massive uranium mining in Jáchymov in the 1950s. At the same time, this national cultural property serves as a symbol of the suffering of the political prisoners who, in the 1950s, were imprisoned under inhumane conditions in the forced labour camps near Jáchymov. The misuse of uranium deposits in Jáchymov at the time when the Ore Mountains served as a supplier of this strategic raw material to the Soviet Union and ruthless use of the class enemies of the Communist regime in the extraction and dressing of uranium raw material with high health risks is an important global site of memory.

The last partially preserved heritage site of this period is the Red Tower of Death, a seven-storey building built of red bare bricks in 1950/1951 with a ground-floor dispatching warehouse and a steel loading ramp which served until 1961 as a central crushing and sorting plant of the uranium ore mined not only in Jáchymov, but also in other Czechoslovak uranium mines of that time. The Red Tower of Death was part of the Vykmanov II labour camp, established in early 1951. Around 300 particularly politically inconvenient prisoners used to work there, among whom there were many Catholic priests and participants in the Western World War II resistance. The main seven-storey red brick tower became one of the most dangerous workplaces in the Jáchymov area, because everyone who worked there without any protective equipment and clothing, got into direct contact with the radioactive material and inhaled radioactive dust.